The 'One Fair Wage' campaign has been set up by the Scottish Youth Parliament (SYP) to encourage individuals and organisations to pledge their support for a Scottish Living Wage.  SYP believes everyone in Scotland deserves to earn at least enough to live on.

The SYP believe it's obscene for people to be working whilst still trapped in poverty and that all workers - regardless of how old they are - should earn a Scottish Living wage. Govan Law Centre agrees, and applaudes the SYP for launching such a fantastic campaign.

A Scottish Living Wage can make a real difference to half a million low-paid Scots. Over the next year the Scottish Youth Parliament will call on politicians, businesses, councils and charities to pledge their support for a Scottish Living Wage.  GLC hopes you will pledge your support too. It's time for One Fair Wage.
Posted by stephen at 3:48 AM 4 comments:

Northern Rock (Asset Management) plc (NRAM) has asked the Court of Session to dismiss its appeal against the decision of Sheriff Deutsch in the NRAM plc v. Millar GLC test case. NRAM's appeal was dismissed on Friday, 7 September 2012 (the procedural hearing date of the case) with judicial expenses awarded in favour of the defender.

The reason given by NRAM for abandoning its appeal to the Inner House was because it had become aware the Scottish Government was now willing to bring forward law reform to amend its 2010 Pre-Action Requirements Order (PAR) so that 'default' would mean a simple missed mortgage payment. The ruling in Millar meant that key information - and a final last chance to remedy mortgage 'default' - had to be provided on or after the expiry of the calling up notice, generally served before court proceedings were raised.

It is understood* (see update below) the Scottish Government will amend the definition of 'default' in the PAR, so that there will be no need to provide key PAR information prior to proceedings being raised.

GLC's Principal Solicitor, Mike Dailly said: "We believe the Millar judgment was fantastic news for Scottish consumers because it meant they would always get an extra and final chance to avoid court proceedings after a calling-up notice.  Govan Law Centre is dismayed to hear that the Scottish Government will now scrap this final last chance for Scottish homeowners, and in so doing render the Pre-Action Requirements toothless, and in effect a duplication of the FSA's existing equivalent MCOB rule. The Scottish Government should be backing struggling homeowners and not legislating for lenders".

GLC notes that Sheriff Deutsch had eloquently explained the logic of PAR information being sent after the expiry of a calling up notice in his judgement in Millar (at paragraph 84, which is reproduced below).

The first public mention of the Scottish Government legislating for lenders was raised in an article in the industry magazine, the Mortgage Finance Gazette, where Mr Rob Aberdein of Aberdein Considine & Co., Solicitors (a Scottish firm who act for a number of lenders in repossession proceedings in Scotland) said in relation to the NRAM v Millar case:

"Should an appeal not be forthcoming or be unsuccessful then I did meet the Scottish Government at the start of the year on the matter of the impending Glasgow cases decision and have exchanged correspondence with Alex Neil MSP, the cabinet minister for infrastructure and capital investment, on the topic.  Both are supportive of corrective secondary legislation as they believe the decision is not consumer friendly and potentially damaging to their goal of avoiding repossession and resultant homelessness".

GLC is not aware of evidence whatsoever to support the assertion by Mr Aberdein, which he ascribes to the Scottish Government.  We note that lenders have already changed their practice since earlier this year to comply with the legal reasoning in Millar. Further, we note that any proposed law reform cannot be retrospective.

Note
NRAM plc v. Millar &; RBS plc v. McConnell judgment:
[84] Regardless of whether those responsible for managing the bill which gave rise to the 2010 Act operated under a misunderstanding as to whether non-payment constituted a default for the purposes of section 19 of the 1970 Act, now that the position has been clarified, it appears to me that the required information will actually be sent to debtors at a time when, given the recent expiry of the calling up notice, they might be more inclined to pay that information some serious regard. At that point the debtor should be in no doubt that the creditor may apply to the Sheriff court for warrant to repossess and to sell the property. That level of understanding on the part of the debtor might be less likely to exist if, in accordance with the pursuers' interpretation, the default which triggers the requirement to provide information, need be no more than one month of arrears. The possibility must exist that there will be debtors with a tendency to pass in and out of an arrears position on a regular basis. One corollary of that situation might be that such persons would receive a regular stream of correspondence providing the required information. Such a volume of similar correspondence might be expected to be ignored. It might also be expensive for creditors.

* Update from 24 September 2012: Scottish Government confirms it has not made any decision to amend the 2010 Order: link to letter confirming same.
Posted by stephen at 1:13 PM 2 comments:

GLC has been invited to present its Discussion Paper on proposals to help financially vulnerable Scots cope with predatory payday lending practices at a roundtable discussion in the Scottish Parliament next month.

The event is being hosted by Kezia Dugdale MSP, Shadow Youth Employment Minister on Wednesday 24 October 2012, and will bring together a wide range of national consumer, civil society and advice bodies.

GLC believes the Scottish Government can introduce a Fast Track Debt Arrangement Scheme targeted at payday loans under existing powers in the Debt Arrangement and Attachment (Scotland) Act 2002 as amended.
Posted by stephen at 11:36 AM 3 comments: 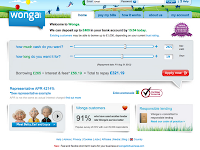 There has been an exponential growth in the UK payday loan market, with an increasing incidence of our clients in Scotland being unable to pay their rent, mortgage or utility bills due to indebtedness to exploitative payday loans. With payday loans having equvialent APRs of 3,000 to 5,000% - clearly usury, unethical and unfair - Govan Law Centre (GLC) believes the Scottish Government and Parliament must look to a solution in the public and consumer interests.

The Minister for Debt and Insolvency in Scotland, Fergus Ewing MSP, has accepted there is a problem with payday lending and has stated his belief that greater regulation is needed by Westminster. Yet, there is much the Scottish Parliament could do to help Scots struggling to meet the unfair and unsustainable costs of high interest credit.

GLC is publishing a Discussion Paper, which proposes the creation of a new sub-category of the Debt Arrangement Scheme (DAS), which could be designed to provide a fair but flexible form of debt relief for high interest credit only.  This would mean that instead of all debts being repaid as part of a Debt Payment Programme (DPP), the debtor would have an option of repaying payday loans in a 'mini-DAS' on a fast track basis.

Such a 'fast track' scheme could target usury rate loans by ensuring the principal sum(s) were repaid fairly within 24 months, with high interest and roll-over charges being suspended and written off following a successful repayment of the debt. Such a scheme could provide essential respite to consumers in Scotland trapped in a cycle of payday loans, enabling other priority debts to be paid, and helping citizens to take control of their financial position.  We would welcome your thoughts on this proposal: GLC Discussion Paper on a new Fast Track DAS for usury rate loans in Scotland.

Finally, we believe that the Scottish Ministers already have power from sections 7 and 7A of the Debt Arrangement and Attachment (Scotland) Act 2002 to introduce a Fast Track DAS for payday loans right now, without the need for primary legislation or undue delay.
Posted by stephen at 7:06 AM 2 comments:

Govan Law Centre welcomes news of additional consumer protection for customers of Claims Management Companies (CMCs) in England and Wales, but remains concerned that Scottish consumers continue to go without any legal protection in relation to CMCs providing services in Scotland.

The UK Government has announced that from next year people who are ripped off or receive a poor service from CMCs will be able to pursue a complaint to the Legal Ombudsman for England and Wales. The Ombudsman can award up to £30,000 in compensation in individual cases. CMCs are regulated by the Ministry of Justice (MoJ) under the Compensation Act 2006 for services provided in England and Wales, whereas in Scotland they remain unregulated, albiet the subject matter is devolved to the Scottish Parliament.

GLC's Principal Solicitor, Mike Dailly said, "Consumer protection is being strengthened south of border in relation to poor service by CMCs – and rightly so - while Scotland remains an oasis for CMCs to do as they please.  Our unregulated market means that the people of Scotland continue to have no redress or protection against CMCs. We call on the Scottish Government to close this major gap in Scots law sooner rather than later'.

Many CMCs are well known for malpractice and ripping consumers off; including not providing customers with contracts or paperwork, not allowing cancellation of their service or refusing to allow any refunds, misleading and exaggerating their success or service during sales calls, taking payments from customers’ bank accounts or cards without authorisation, and using third parties to engage in unsolicited marketing.
Posted by stephen at 8:09 AM 2 comments:

The Govan Law Centre Trust is seeking a Qualified Solicitor with good civil court and preferably employment tribunal experience. Experience in social security, housing, employment, equalities and administrative law would be an advantage.

The successful candidate will work within our Govanhill Law Centre (GhLC) office. GhLC is a branch office of Govan Law Centre based in Glasgow's Govanhill and serves the unmet legal needs of the wider local community, with a focus on enforcing the rights of minority ethnic communities and in particularly the Roma community. The post will involve working in partnership with a number of agencies, in particular in relation to the work with the Roma community.